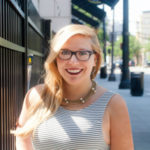 Michelle Gibson is a Columbus native who graduated from The Ohio State University in 2010 and earned a Bachelor of Arts in English with a minor in Professional Writing. She was a member of the Humanities Scholars and its Communications Committee, writing for the quarterly newsletter starting in freshman year and taking on the roles of Committee Chair and Editor-In-Chief by senior year.

Michelle is currently the Communications & Outreach Coordinator for the Short North Alliance, a non-profit, where she writes weekly Art Spotlights for the ShortNorth.org blog and plans promotions for businesses in the Short North Arts District. She joined the Honors & Scholars Alumni Society Board in 2018 to connect with alumni and current students through networking and social events.

Caroline DeSantis graduated from The Ohio State University in 2018 with a Bachelor of Science in Economics, with minors in English and Human Resources. While at Ohio State, she was Director of Membership Development for the Honors & Scholars Programming Board, and is excited to stay involved with the H&S community after graduation.

Originally from Staten Island, New York, Caroline has grown to love the Midwest and Buckeye football. She currently works at JPMorgan Chase as an Analyst supporting consumer banking processes. In her free time, she loves trying new restaurants and breweries, traveling to new cities and visiting the Columbus Zoo.

Meaghan Agnew grew up outside Atlanta, but her family moved to a Dayton suburb in 2000 and she graduated from Springboro High School in 2005. In 2009, Meaghan graduated with Honors from Ohio State with a BA in English and a minor in Italian. She was a part of the Honors program all four years and lived in the Bradley honors dorm her freshman year.

Since 2012, she has been working as a technical writer at the software company, Infor. Meaghan became involved with the alumni board in 2012 as a way to stay connected with OSU and with the Honors and Scholars program in particular. Despite staying in Columbus after graduating, she was only still involved with the university through attending sporting events. Meaghan wanted to have a more personal alumni experience and hoped to contribute by becoming involved with the H&S alumni group. She finds that it is both fun and meaningful to plan events and meet current students through her involvement on the board. 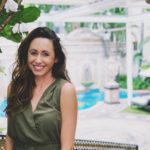 Jenna DeCarlo graduated from The Ohio State University in 2017 with a Bachelor of Arts in Speech and Hearing Science with Honors Research Distinction and minors in Spanish and Developmental Psychology. She went on to obtain her Master of Arts from Ohio State and graduated in 2019 with a degree in Speech-language Pathology. During her time at Ohio State, Jenna was actively involved with the Honors & Scholars program. She was a three-year member of the Honors & Scholars Ambassadors executive board, an organization that provides programming and support for current and prospective H&S students. She was also a featured student speaker in 2015, and a host  of the annual Honors & Scholars Launch in 2016.

Jenna is currently completing her clinical fellowship year in speech-language pathology at the University of Wisconsin – Madison in the Communication Aides and Systems Clinic. She is looking forward to staying connected to Ohio State and the city of Columbus through her involvement with the Honors & Scholars Alumni Board. 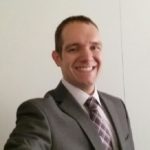 Matt Dodovich joined the Honors & Scholars Alumni Society Board in August 2019. He is a lifelong Ohio resident, originally growing up in Barberton, OH before moving to Columbus in 2003 to attend college at The Ohio State University. Matt graduated from OSU in 2008, earning a B.S. with honors in Economics and Criminology and a minor in Forensic Science. He also received his J.D. from the Michael E. Moritz College of Law in 2011.

Matt lives in Hilliard, OH with his significant other, Sarah. He previously served on the Undergraduate Student Government Alumni Board in a myriad of roles, including two years as board president. She has also continued volunteer work in her hometown at Houston Methodist Sugar Land Hospital and maintained her enthusiasm to mentor students at Stafford Boys and Girls Club. As a result, she has received County Judge Herbert’s “Volly Award,” The President’s Volunteer Service Award and Scholar of Promise Award. While working as a Physical and Occupational Therapy Technician at Houston Methodist Sugar Land Hospital, she has brought efficiency to daily clinical operations, and her patient care experiences has led to interest presently as a research volunteer. As an active volunteer, Chandani looks forward to create the best opportunities and experiences for everyone and giving back to her alma mater, which has transformed her today. Dr. Allyson Sterman is originally from Akron, Ohio. She graduated OSU in 2011 with a bachelors degree in Microbiology and a double minor in Animal Sciences and Music. She participated in honors research and graduated with a honors distinction in research and a honors thesis. Dr. Sterman was an active member of the Biological Sciences Scholars program throughout undergrad. In 2015, she graduated OSU again with her doctorate of veterinary medicine (DVM). She spent her first year working as a veterinary rotating intern at Texas A&M University and will stay at TAMU for the coming year as a specialized veterinary surgical intern. Dr. Sterman originally became involved in the Honors and Scholars Alumni Society to help give back to the programs that helped make her undergraduate years as great as they were.